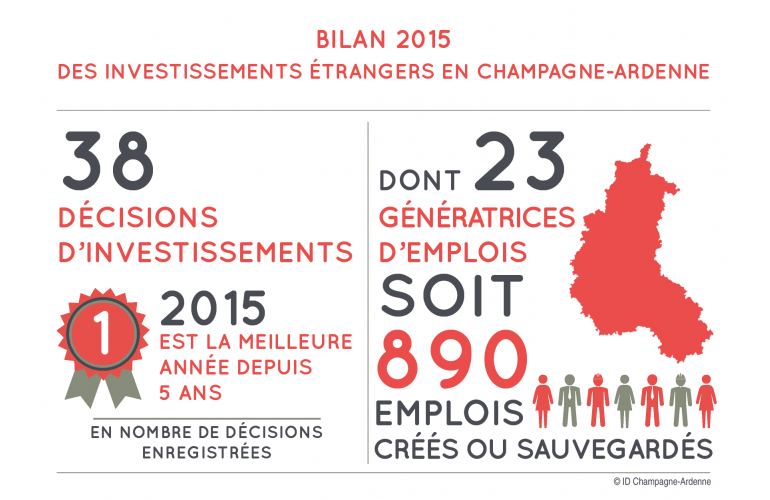 Ardennes Développement is linked with this national organisation through ID Champagne Ardenne regional agency, which centralises the distribution of corporate projects and which published the 2015 regional balance sheet.

In 2015, 962 corporate investment decisions using foreign capital have been recognised in France. This figure is a slight drop on the figure from 2014, however, the creation and preservation of jobs associated with these investments increased by 27% (33,682 jobs created or preserved in 2015). As was the case in previous years, the United States and Germany are the countries who invested the most in France. The majority of projects were new creations (476) although the jobs created or maintained were mainly the result of repeat projects (13,198 jobs).

In 2015, 10% of these jobs concerned the Alsace Champagne-Ardenne Loraine region, which makes France’s third largest foreign investment territory, after Ile-de-France (28%) and Hauts-de-France (25%). The region is home to the majority of the country’s production projects, which constitute the main source of investment (285 sites) and jobs (16,168).

French exports have also increased in 2015 (+4.3%), reaching 455.1 billion euros. A total of 125,000 French companies export their products or services internationally. The Ardennes is among the territories where the rate of export is well above the national average.

With 20,000 companies located there, France receives the third highest number of job-creating foreign investments, behind Great Britain and Germany, according to the EY. Foreign investment enterprises thus contribute 19% of the revenue or the national economy, accounting for 32% of exports leaving France and 28% of the expenditure in the area of research & development (source: Insee).