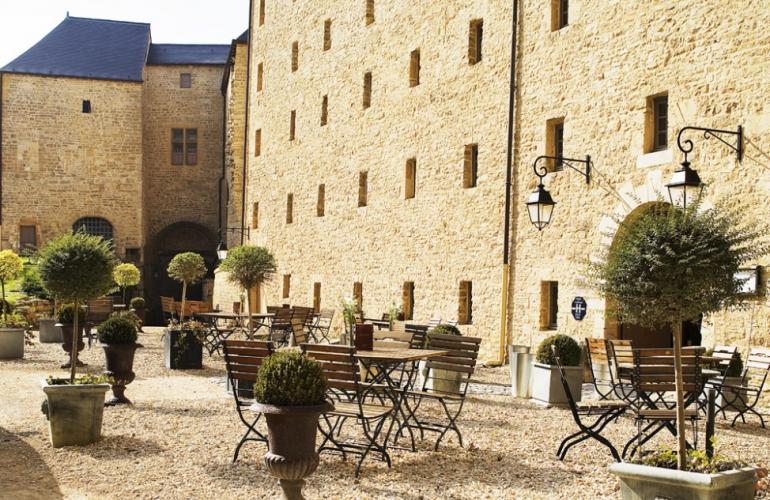 The Hôtels & Patrimoine Group [Hotels & Heritage] which runs the 4-star hotel at the Sedan fortified castle will soon have two additional addresses in France.

Founded 10 years ago by Olivier Gourio and Laurent Cadieu, the Hôtels & Patrimoine Group converts historical buildings into high end hotels. Three exceptional sites, all classified as historical monuments, are currently under the management of the group: the Abbaye Ecole de Sorèze [Sorèze Abbey School] (72 rooms, in the Tarn area), the Couvent Royal de Saint Maximin [Royal Convent of Saint Maximin] (67 rooms, in the Var area), and the Château Fort de Sedan 4* [Sedan Fortified Castle] (54 rooms, in the Ardennes). In Spring 2016, the Hostellerie de l'Abbatiale de Saint-Savin [Hotel at the Abbey of Saint Savin] (23 rooms, in the Vienne) classified as a World Heritage Site by Unesco, is set to strengthen the group's portfolio. It will be followed by another establishment at the Charité-sur-Loire [Charity on the Loire] (50 rooms, in the Nièvre) in 2017. Affiliated with Alain Ducasse's Châteaux et Hôtels Collection, in 2014 the Hôtels et Patrimoine Group realised a turnover of 5 million euros, welcoming 50,000 clients to its hotels and serving 55,000 covers in its restaurants. The clientèle is 50% French, although more than 30 nationalities have already been seduced by the history of its buildings.

The Hôtel “Le Château Fort” de Sedan is a good reflection of the company's success. This was confirmed by the CEO, who commented, “Although Sedan is far from being one of the most touristy destinations in France, we managed to achieve a 70% occupancy rate for 2014”. Continually seeking to improve, it obtained its 4th star last year and just a few days ago opened a bistro headed up by the chef of the "la Tour d’Auvergne" restaurant. More than simple accommodation, the château is also a suitable venue for business tourism and the organisation of events.