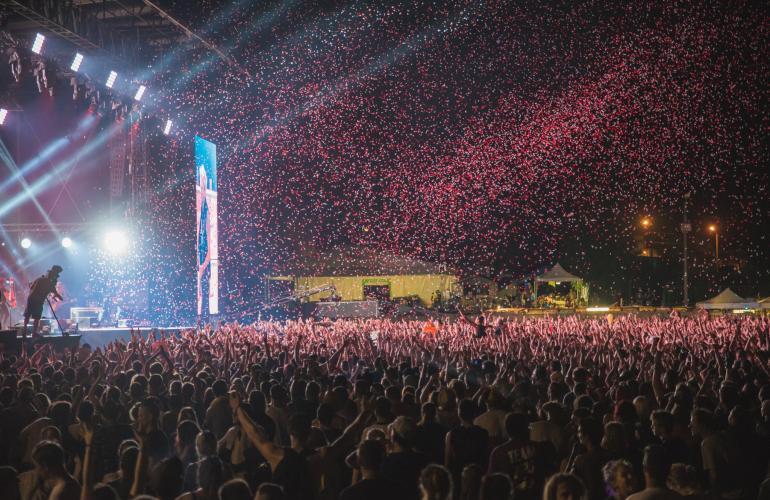 From 25 to 28 August Charleville-Mézières, the birthplace of Rimbaud, hosted the 12th Cabaret Vert festival, under the title 'Wild Wild Fest'.

Created in 2005 by the FLaP association, the attendance of the Ardennes-based festival has practically doubled in the last ten years (85 000 visitors in 2015, 94 000 in 2016). Cabaret Vert is now one of the top 10 festivals in France ; internet users have placed it third in the "Best Large Festival" category (Festivals Awards).

The success of this event lies in its eclectic programming combining rock (SUM 41), hip-hop, rap (Nas), electro (M83), soul (Sharon Jones) and French singers (Indochine, Louise Attaque), but also in its friendly and thoroughly eco-responsible atmosphere (from which it gets its name, which is incidentally taken from a poem by Rimbaud). Amongst the one-hundred-year-old trees of the Bayard Square (where the festival is located), festival-goers can enjoy culinary specialities and craft brews of the Ardennes, while listening to the music.

Over the years the Cabaret Vert has become a driver of the Ardennes economy. Actually, according to a study conducted in 2013 by the Ardennes Chamber of Commerce and Industry, economic benefits associated with the rock eco-festival reached almost 3.45 million euros with an attendance of 75,000 spectators.

More than just a musical event, the Cabaret Vert contributes to enhancing the expertise and hospitality of the Ardennes.