Cabaret Vert: there is talent backstage too 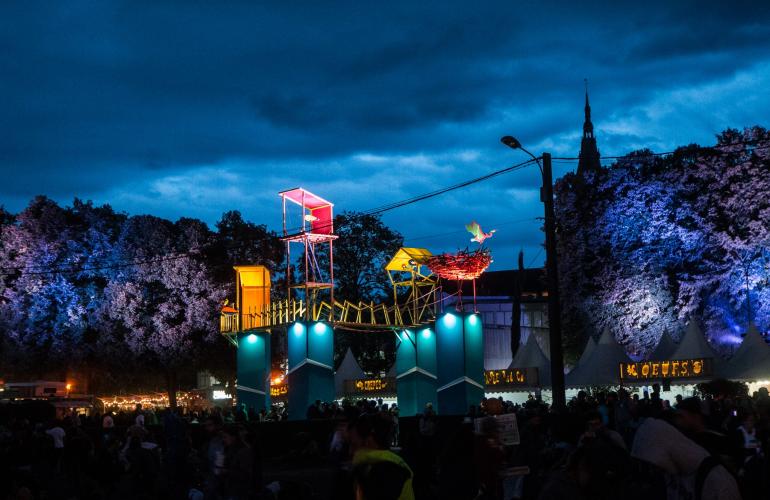 The Cabaret Vert music festival was set up in 2005 to highlight how much French Ardennes has to offer. Around 100,000 spectators now attend the event in Charleville-Mézières each year.

The festival is a more recent addition to the scene than its more famous competitors (Eurockéennes, Vieilles Charrues...) which have been up and running for about 30 years. Cabaret Vert stands out because it makes use of the area’s cultural, culinary and economic heritage and runs in an environmentally responsible way.  This approach and the resulting atmosphere, unique to the French Ardennes festival, attracted 94,000 festival goers in 2018. The Cabaret Vert evolves each time. It is constantly reinventing itself but also seeks to stay true to its initially successful format.  This year the layout was revised to include a marquee for the Illuminations stage, the development of the Green Floor, an electronic music stage alongside the river Meuse using renewable energy sources and, above all, the addition of a fourth stage in the Groin-Groin.

The 2018 festival also stands out for the major political figures who have attended it, in particular French Prime Minister, Edouard Philippe. This is real recognition of the importance of this cultural event.

This success is down to more than 2,000 volunteers, 350 private and public partners and a wide range of expertise.  In addition to the local produce on offer from more than 30 food stalls, the cabaret showcases a range of technical and artistic talent.  A range of tradespeople are called upon to create the various spaces for members of the public, partners, technicians, volunteers or artists. The Cabaret also has an exhibition and conference space, l’IDeal, which takes on current topics such as sustainable development and the digital age.  In fact, Hackathon 2017 featured the same two themes the festival did.  Over the cabaret weekend, pupils from Ardennes school Simplon in partnership with Hackardennes, tested and suggested improvements to the competition winning, Les Sardines, global environmental app.

Cabaret Vert has become a key event on French Ardennes social calendar and showcases the work taking place to liven up the area, build bridges between old and new and drive forward the green agenda.