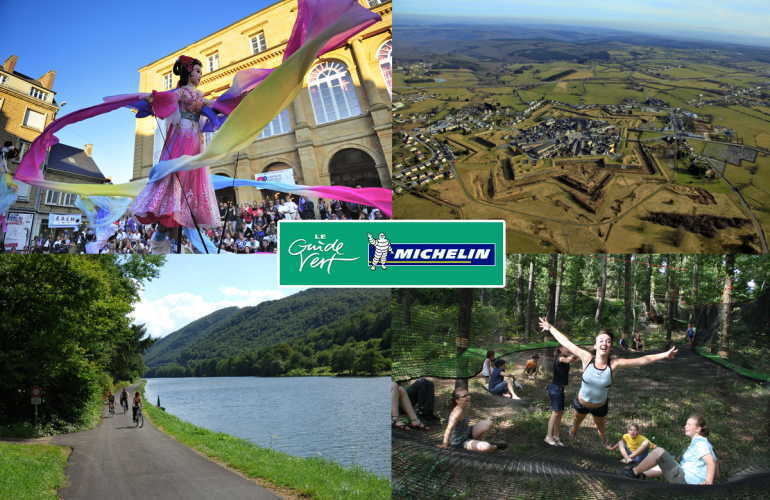 The Michelin guidebook first appeared at the start of the 20th century, published by the tyre manufacturers of the same name. Today it’s the industry reference. As well as awarding its famous stars for cooking, Michelin’s Green Guide celebrates tourist destinations that place an emphasis on discovering a region’s natural and cultural heritage.

The latest Champagne-Ardenne 2017 edition came out on Monday 13th March. French Ardennes stands out with six ‘coups de coeur’ favourites, and two marked as ‘incontournable’ or not to be missed. The guidebook recommends the following: discovering the meandering Meuse river on the Trans-Ardennes bike path, Chêne Perché, a treehouse park with tree top adventure course in Signy-l’Abbaye, the Saint-Didier baroque church in Asfeld, Rocroi’s star-shaped fortifications and the Argonne Discovery Park near to Vouziers. This park is partly a zoo, partly a theme park and partly a museum. Visitors can find out more about wildlife’s nocturnal patterns. It’s a good example of the type of “green” tourism that is developing and for which French Ardennes are showing undeniable flair. In fact, the growing visitor numbers at the Argonne Park, is evidence of that.

The final attraction that the Michelin Guide singled out is the Charleville-Mézières international puppet show festival which is set to take place from the 16th to the 24th of September 2017. The previous one, which took place in 2015, drew in 160,000 visitors.

The two essential monuments to see in the area are still Place Ducale in Charleville-Mézières, which is identical to Place des Vosges in Paris, and Sedan Castle Fort which is the biggest fortified castle in Europe.

These awards are a reflection of the work that the Tourism Development Agency has put into raising awareness of the area and developing the idea of Ardenne as a destination. The sector’s strength is reflected too: there are 880 jobs in the Ardennes tourist industry and it generates 35 million euros in turnover (not including the restaurant industry).