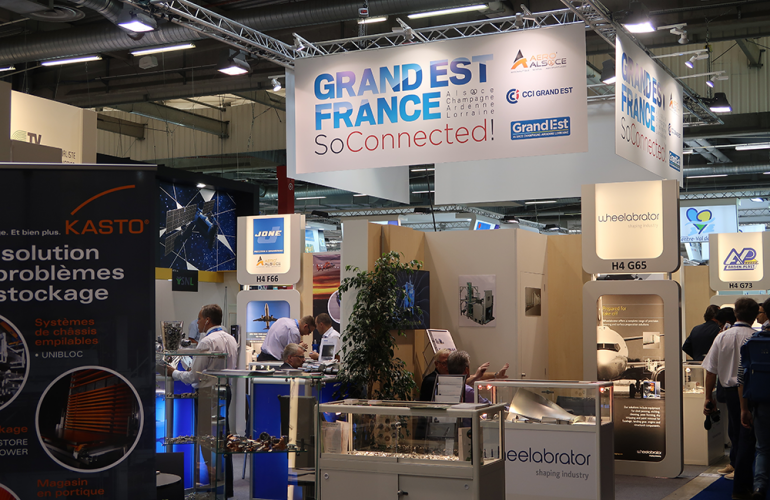 The 52nd edition of the Paris Air Show was held between 19th and 25th June 2017 at the Parc des Expositions du Bourget in Paris. The Ardennes was well represented at this unmissable global industry event.

As popular with professionals (roughly 150,000 visitors) as with the general public (roughly 200,000 people), the Paris Air Show brings together all the players in the industry, focusing on the latest technological innovations and aerial presentations. More than 2,300 organisations from around fifty countries exhibit at this show. The companies present at Paris Air Show are mainly located in France (50% of the exhibitors) and enjoy international visibility with hundreds of foreign official delegations.

As a traditionally industrial region, the Ardennes, home to numerous subcontractors for the aeronautical sector, took advantage of the Paris Air Show to show off its expertise. Five Ardennes companies represented the region in the Grand Est collective pavilion, in collaboration with the Chamber of Commerce and Industry of the Ardennes:

Other companies from the Ardennes were also present. The American group Amphenol, which offers connectivity solutions, has chosen its Carignan site to organise the promotion of its Amphenol Military & Aerospace Operations division, through 22 represented companies. Amphenol Air LB generates 75% of its sales in the civil and military aeronautics sector. The Ardennes - Étienne Riché aerodrome which is run and managed by the Regional Board of the Ardennes also attended the Paris Air Show as an exhibitor.

As a national leader in the production of cast iron, the Ardennes region has refined and diversified its skills, particularly in plastics and industrial equipment, and the region now has real resources for major international groups such as Safran, Airbus and ArcelorMittal.