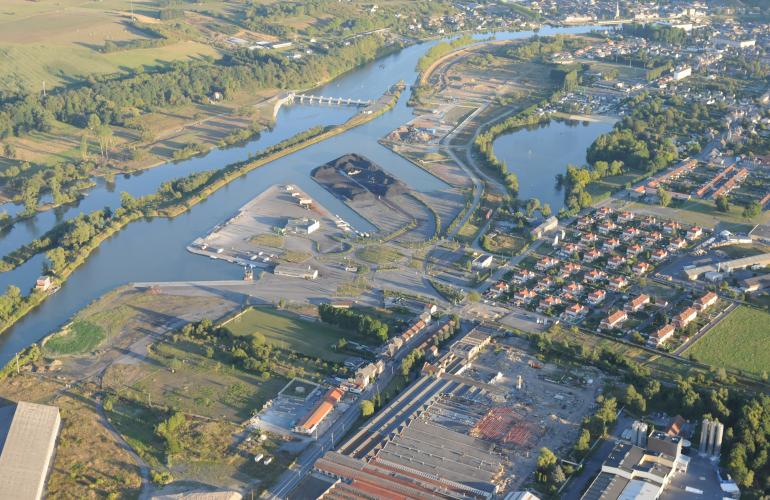 Port Givet was France’s biggest river port in the sixties (120 staff and 1.8 million tons of merchandise). It has benefited from substantial investment in recent years, aimed at strengthening its strategic role.

In January 2011, the Ardennes Chamber of Commerce and Industry, owner of the site, entrusted the management of Port Givet to the Eau et Force company, a subsidiary of Suez Environnement. Its ambition is that Givet should become an essential stage in water-borne traffic between France and the Benelux countries, as well as a reference in river trade in France.

With a total area of 28 ha and 1,400 linear metres of quayside around three harbour basins, this strategic facility for the economy of the Ardennes now provides clients with numerous infrastructures:

In particular, the modernisation of the site has enabled the navigation of large boats on the Meuse and access to the big port networks of northern Europe (Antwerp and Rotterdam).

Port Givet is steadily improving and modernising its installations to increase its market share, e.g. by welcoming new types of merchandise. In 2013, it provided the handling, stock management and transport for around 600,000 tons of traffic.

The promotion of water-borne transport, which is by its very nature ecological, has been part of the sustainable development policy executed by Eau et Force for several years. Eau et Force aims to make Port Givet an example with regard to environmental management and will implement ISO14001 certification across the site: in addition to the nature of its business, the management of the Port will be carried out with the permanent aim to control and reduce environmental impacts.