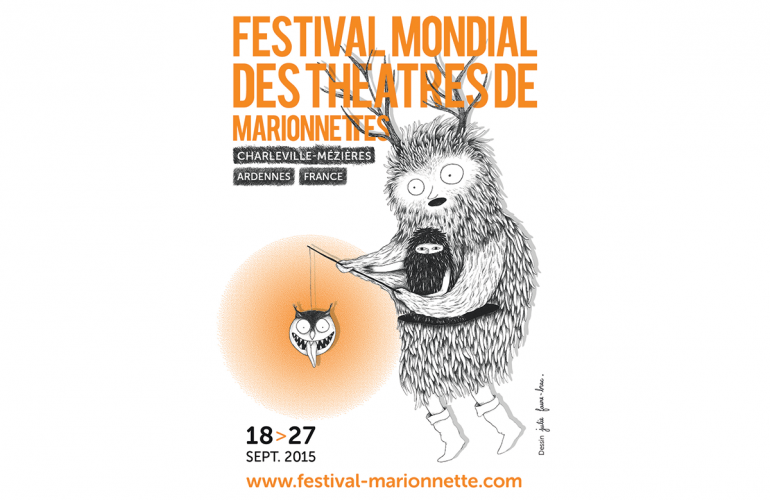 From 18 to 27 September, the town of Charleville-Mézières will host the 18th edition of  Puppet Theatre festival, the essential meeting place in the world of marionette arts.

Established in 1961, the World Puppet Theatre Festival, held every other year in Charleville-Mézières, is the largest puppet theatre in the world, and vividly showcases the vitality of this form of live entertainment.

Organised by the association by the name of Petits Comédiens de Chiffons [little cloth comedians/entertainers] and its 500 volunteers, presided over by Jean-Luc FELIX, it is the leading puppet festival in the world and the largest gathering of puppeteers coming from 5 continents (Australia, Belgium, Brazil, Chile, Spain, Iran, Italy, Thailand etc.).

For this, the 18th edition, 115 companies will be present, with 569 shows planned over the 10 days of the festival. But that's not all - there will also be exhibitions, puppet cinema, puppet get-togethers at the Place Ducale and the "Cabanes des Irréels" [huts of the unreal beings] (odd characters from the Compagnie Créature).

A European seminar and public and professional debates are organised right throughout this France Inter event. Worth noting: Wallonie Bruxelles International and Wallonie-Bruxelles Théâtre Danse will be attending a seminar on the subject of alternative financing (Kiss Kiss Bank Bank and Europe Fresh). The Association of Towns that are Friends of the Marionette (Association des Villes Amies de la Marionnette, AVIAMA), which brings together towns and local governments from around the entire world to focus on the development of the art of the marionette, will also be in attendance and will hold is AGM on 25 and 26 September.

From the outset, the town of Charleville-Mézières has been the primary partner of the festival, and is the centre of marionette theatre, both regionally, nationally with the Ecole Supérieure Nationale des Arts de la Marionnette [National Higher Institute of Marionette Arts], and globally, hosting the Union Internationale des professionnels de la Marionnette [International Union of Marionette Professionals].

Around decentralised thirty events are organised during and after the festival in the municipalities of the department of the Ardennes, within the Champagne-Ardenne region, in Picardy and in Ile-de-France, as well as in Belgium.

A veritable driver for the local economy, the 17th edition of the World Puppet Theatre Festival drew in almost 160,000 visitors.