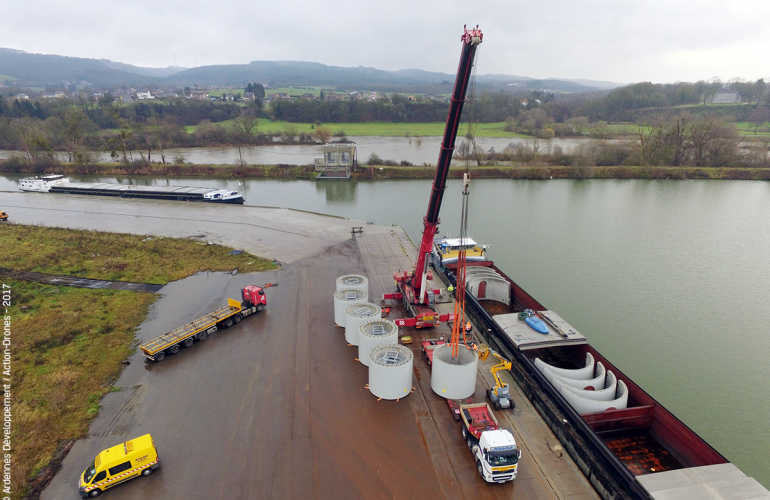 In December 2017 and then January 2018, ENERCON, a European wind turbine manufacturer, successfully transported wind turbine components through Givet Port (French Ardennes), which as a result was able to demonstrate its role as a multimodal sea-rail-road platform open to Northern Europe.

After the foundation was poured, 65 segments of concrete masts—the heaviest of which weighed 58 ton—arrived on barges at Givet Port through the Northern European wide-gauge waterway network.

The teams of the multimodal platform, supported by ALTEAD, stored the segments on the wharf and then loaded them onto special convoys headed for the Semide wind farm in the south of French Ardennes (five ENERCON E-115 E2 wind turbines measuring 150 m in total), developed by the company EnergieTEAM, whose closest receiver antenna is based in Vouziers.

Two additional cranes were deployed on the Port on this occasion, demonstrating its ability to process all types of goods, particularly the heaviest types, thanks to its wharf that can support 565 ton.

This operation, led by a major industrial player in the field of wind energy at global level, confirms the logistic potential of French Ardennes. The region provides space for businesses and appropriate infrastructure, including Givet Port, linked to the large ports in northern Europe, which ensures multimodality thanks to rail and road transport.