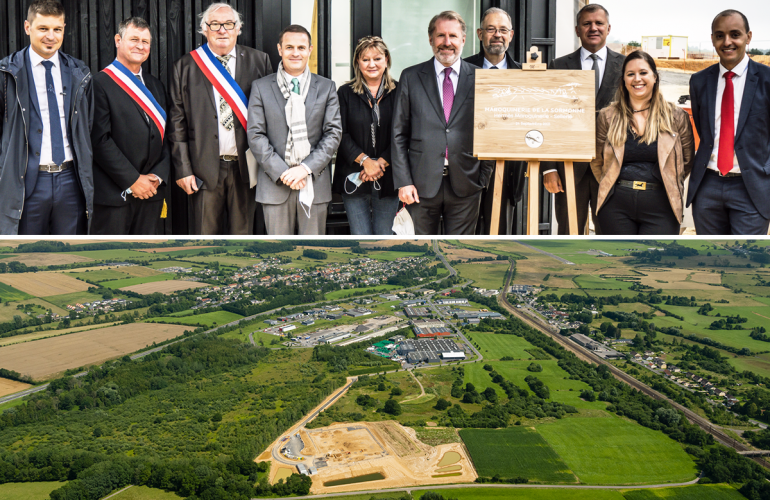 Flanked by its local partners, including Ardennes Développement, Hermès officially started work on its second Ardennes site on 24 September, which will open in 2023 as part of the Tournes and Cliron business park.

After Bogny-sur-Meuse, inaugurated in 2004, Hermès is strengthening its foothold in the Ardennes region with this new manufacturing plant which will eventually accommodate 250 artisans. Their training will be provided by the “École Hermès des savoir-faire” which, as part of its partnership with the Ministry of Education and more specifically with the Greta des Ardennes and the Charles de Gonzague college in Charleville-Mézières, will also assess the Leather Goods CAP diploma evaluations for apprentices. In addition, passing along the saddlery and leather goods professional culture as well as Hermès premium know-how will be facilitated by the proximity of the two Ardennes factories.

The architectural design of the Sormonne leather goods factory, which is provided by the Lille architectural firm Coldefy & Associés, supports the Hermès group’s environmental ambitions. In order to monitor and control its energy consumption, the site will be equipped with 2,000 m² of photovoltaic panels and is aiming to get the E4C2 label for a positive energy building. As saving biodiversity is such a strong value for them, Hermès is working together with environmental experts to preserve the habitat of the forty protected species of birds and amphibians that live near the site.

To mark the first step in the process, a pewter medallion was cast by two artisans, one who started in the leather goods workshop in Ardennes 20 years ago and one who is currently training at the temporary workshop of Val de Vence. They are mother and daughter. Guillaume de Seynes, a sixth-generation member of the Hermès family, heading up the Hermès group’s production activities, broke this mould before passing it on for the mother and daughter to insert the medallion in a wooden plaque that had been veiled in a piece of leather. Family, quality and the environment are important to Hermès.

Since 2010, Hermès has opened nine leather goods factories in France, increasing the number of saddlers and leatherworkers in the group to over 4,000. Two other manufacturing projects are underway, in Louviers (Eure) and Riom (Puy-de-Dôme). Hermès is a brand that is is known for its excellence and as a benchmark for "French-style" know-how. It is now increasing its production capacities with a distinct focus on French employment.

With its specialised training courses, soon to run on two sites and over 500 employees, Hermès is setting up a genuine leather goods centre in the Ardennes and thus giving the Ardennes region a new dimension, which complements its industrial sector.